When I founded this web there was one article I wanted to write about and that was my February’s gig of Imagine Dragons. Well, needless to say my lazy ass never got around that .. until now! The band has announced a second album this year and I have finally a reason to shove my great photos down your throat.

In case you have never heard of Imagine Dragons – they’re an American alternative rock band I genuinely adore. Imagine Dragons has released one album Evolve this year already, however they’re not the only ones to release two albums within one year (Maybe it’s a new trend on West Coast?). The second album Origins will be released on 9th November and apparently it’s supposed to be somehow connected to Evolve in a musical way.

At the moment we know about four songs from the album, the official tracklist can be found online (try iTunes or Google Play).

I had an opportunity to see Imagine Dragons live twice. In the same venue – 3arena in Dublin. The first time it was a pure enjoyment, in the end of 2015 and just five days after the terrorist attack in Paris. I still remember seeing all the Gardai around the venue (usually there’s only like one). I think we all have felt cautious and even the singer Dan Reynolds had spoken about the attack. And not only about that. His sense of social solidarity along with a great voice has won me over.

We left the gig thrilled swearing that next time we’re going again. In the end from our original trio only I went alongside with my brother, M. and Avocado (a story for another time).

The others have not seen ID live before, so the group was buzzing from a pure excitement. I was more excited about their reaction as I’ve already knew that the gig will be worth it – and of course I was right (modesty is my second name). Apart from an ordinary rock gig, they also played an acoustic set. Dan was a human warrior all over again. He talked about LGBT community, mental health and was wearing a gay flag at one point too. During the gig huge inflatable balloons were dropped from the ceiling and at that time I had no clue that 30 Seconds to Mars will try poorly copy this whole moment during their May gig.

Don’t forget to click on every and each photo for a better resolution.

Imagine Dragons studio sound is just perfect, however live they just energize you and you ended up like you need more ’cause they just make you feel that good. Plus their lyrics have a message within or some sort of a meaning, well at least for me. If you ever have an opportunity to see them live just go and see them, trust me it is worth it. 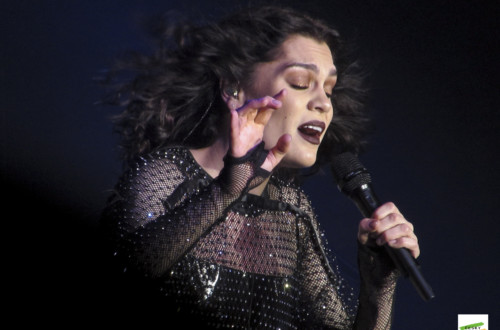