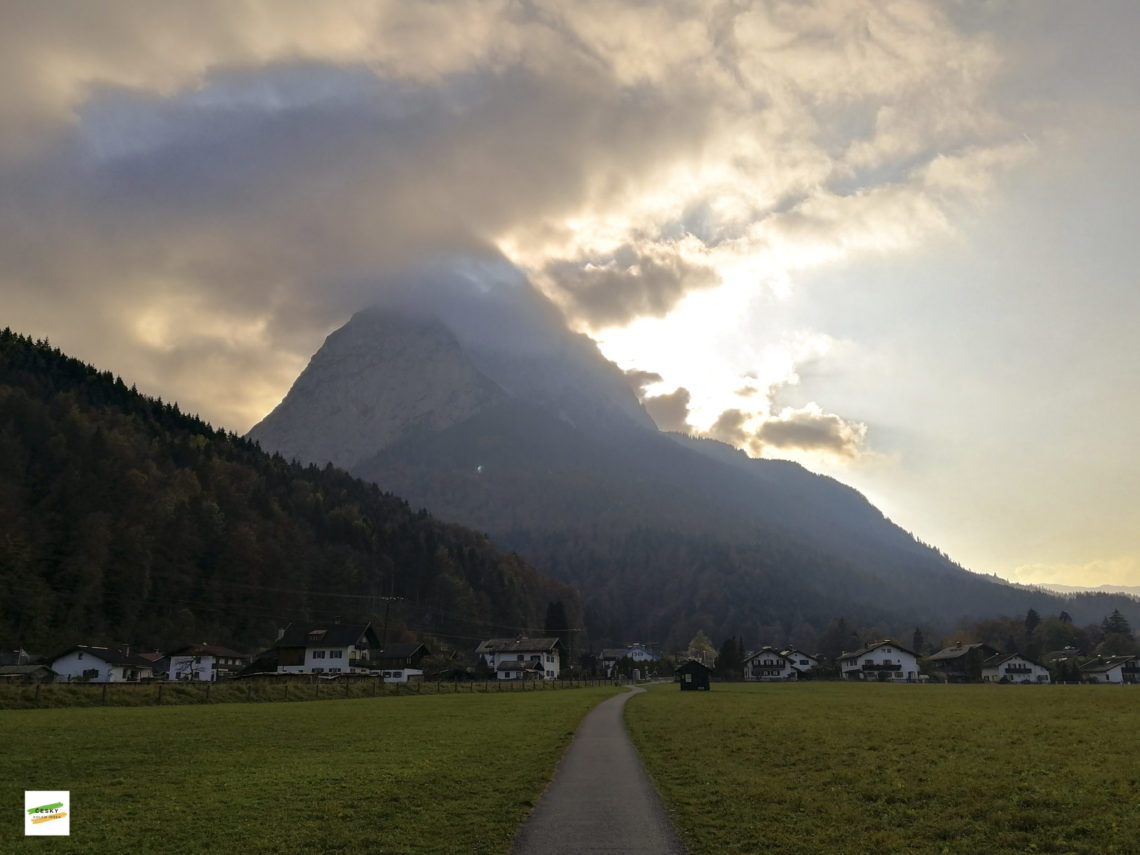 The second Bavarian stop was a picturesque village just by the Alps on the border of Germany and Austria, Garmisch-Partenkirchen. Actuallythose are two villages which were forced to become one by Hitler so the Olympics of 1936 could have take a place here.

Originally my weather app was forecasting sunny warm day all day long. The reality in the end however was a quite different – fog everywhere. Luckily the fog was scattering as the clocks kept moving towards afternoon. I wasn’t exactly warm though but still hungry for a new adventure.

As you already know I always google every place before actually travelling there to make some sort of a mental itinerary. The GaPa itinerary looked as follows:

I wanted to visit all of these during the sunny day and seven hours. And I was thinking that maybe seven hours will be way too much. Ha. Ha. Ha.

I crossed out Zugspitze thanks to the weather (there’s a cable car going on the top of the highest German mountain, so not I wasn’t planning to hike) and also because the return ride costs around €56 and I wasn’t sure I would even see something. I moved Eibsee to the afternoon as the weather was supposed to clear out and in the meantime I went to the ski jumping stadium and the houses on the fields.

The ski jumping stadium worked normally and apparently the winter games are held there too. I was extremely lucky because the German team has just had their training.

The access to the ski jumping stadium is free of charge off-season (I have no clue whether or not you have to pay during winter but I guess the Cups and Championships aren’t free). You can stand right by the “bridge” or take the stairs to the point where the athlete is leaping off the bridge. That was obviously a challenge I couldn’t refuse. Plus I’m not scared of heights so:

The view wasn’t very clear, could only see a halfway through thanks to the fog – no Alps, only a silhouette of some random mountain opposite. The stairs were pretty steep so I was holding the bridge like it’s my last bit of dignity. Plus my legs were killing me since I walked kilometers the previous day so walk all the stairs up and down was a real challenge. I know, I have only the best ideas.

All the tourists were heading towards the mountains. I didn’t have an equipment and the right clothes so I went the other way – towards the houses on the field. At that moment a sun was starting to shine a bit and I could finally see one of the mountains nearby which along with the picturesque houses formed a living fairy tale. Have a look yourself:

Alongside the fields and a railway which takes the visitors to the Eibsee were a lot of bins and benches (!). I had a snack and continued my journey.

I have made some new sheep and goat friends too. Also, someone has three alpacas there. All with different colours. Right by the Alps. I must also point out that apart from the breathtaking nature there are lots of houses in the well-known Bavarian style – same you can see in movies or on photos.

The weather cleared sometime around two o’clock, of course except for Zugspitze. The top of the mountain was still covered in fog which I must admit drove me bananas. I got in approx. the second half of the fields and have taken some good shots .. of myself.

At three o’clock I was still quite a journey away from Hammersbach so the decision was to skip the lake. Instead I have decided to go to Hammersbach as nearest to the Alps as I could and walk back.

The cow dream with bells!

Around four o’clock I made it to the forest just by Zugspitze and the mission was accomplished. It was time to return to GaPa because my bus was leaving in two hours and I wanted to visit one more place there.

The weather was clearing more and more and I noticed that apart from Zugspitze and a small Alp top next to it, there was a whole Alp-ish mountain range which could be seen quite clearly now. It was my first time being so close to Alps and even though it has taken them all day to clear out I was being a bit emotional.

Anyway after two hours of staring on the Alps I have made it back to the town centre. I had a less than hour before my departure therefore I have decided to skip Artur and go to Ludwigstrasse, a touristic spot of Garmisch-Partenkirchen instead.

Okay, maybe it’s a cliche for some people but sorry not sorry the street is picturesque, beautiful in its own way and who are you to judge? I have less than ten minutes to walk through it so here are some quick shots.

And the hostel story – I booked a bed in Wombats City Hostel. They have their hostels in about just five European cities. I chose this hostel because at the time of booking they had the best reviews in between Munich’s hostels – 9.2/10.

The room was clean, the bathroom was clean, the water was hot and the beds are wooden but stable – they don’t creak, no worries to turn around on them and they are quite comfy too. Every traveler has a built-in electric socket and a light with a tiny shelf by their bed. I just had to make the bed on my arrival but it was just another sign of cleanliness.

The hostel has it’s own bar and a kitchen too (you could either cook for yourself or order a meal at the bar). I didn’t avail of the breakfast so not sure if that was any tasty but in overall I was satisfied with my stay.

As you already know from my Munich article the first night was kinda alright. The next day a couple arrived and as quiet as the guy was his girlfriend was noisy. Especially after midnight with handsfree on a phone or with door handles. So I didn’t sleep a lot but I kept thinking of my own bed where I will be back to in two days.

I didn’t see all the stuff I wanted to. I didn’t get to go to the Alps itself, I didn’t walk through the town centre properly, I didn’t visit the lake ..Reasons to return! GaPa is genuinely a nice place for nature lovers and when the weather is well there is a lot to see. I will definitely return to GaPa, probably around summer so I could go up to Zugspitze. And if you ever drive nearby, go ahead and visit this cute place at least for a short walk.

Weekends on the move: one hot day in Howth 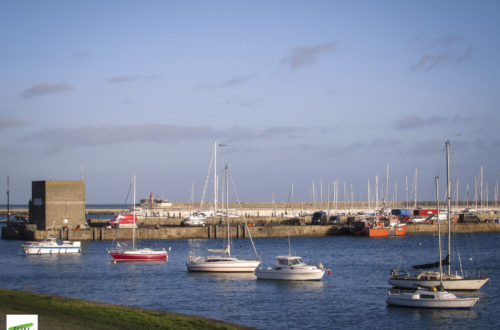