If the name Cobh rings a bell, you’re either a big fan of the history of the Titanic, or you’ve been reading my blog for a really long time (if the latter, then kudos to you!). I wrote about Cobh four years ago when V. and I visited this place. But at that time we weren’t very lucky about weather, so when the last Sunday in August last year the weather got heavenly, it was clear where we were going.

Cobh is one of the places I’ve visited many times since I live in Ireland. Almost every time in really nice weather, however, every time we just parked for a while at the park and then we drove on. Although this town has so much to offer and not just the aforementioned Titanic stuff.

V. and I found out about that in April 2018, I wrote about this trip here – I recommend reading if you are interested in the history of this town, because I won’t repeat that here. In addition to the typical Irish weather, we missed the Titanic Memorial Garden, which is really worth a visit. At that time, I also did not know where the best place to photograph a cathedral with colorful houses is, as we all know from Instagram.

Now I read the old article and holy kittens, I wouldn’t even sell my own mom. But I’m glad that my view has changed over the last few years, and I definitely recommend visiting Cobh and clear your entire afternoon for that.

This time I went to Cobh with my mom, as I had already teased in an article about Howth. I wanted to take advantage of the weather – the blue sky and the incredible heat – and walk around the town without rush and visit places I’ve never been before. Getting to Cobh from Waterford is not the easiest thing if you don’t have a car, which we didn’t. So we took a bus to Cork, where we changed to the train to Cobh, and then we had to keep an eye on the clock so that we wouldn’t miss the last bus from Cork and also the train from Cobh, because Sunday.

We arrived in Cork a little after noon and at one the train left for Cobh. We calmly walked to the train station and waited to be let on the platform (normally you buy a ticket, but we use a so-called Leap card – something like an Oyster card in London). This time everything went smoothly, no detours, because Cobh is the last stop on this route and the train has nowhere to turn. Of course I welcomed that haha

We arrived in Cobh at about half past one and we had almost three hours to go through everything. I have to say that I wasn’t sure if that would be enough, but in the end we just wandered around and sat on the benches for the last hour and so on. But I would also like to point out that we skipped the museum again, so if you are also going to skip the museum, then three hours in Cobh will be enough for you.

So what did we do and see?

From the train station we went towards the center straight to the J. F. Kennedy pier from where there is the best view of the cathedral and the town below. Which my photos don’t prove much, but anyway. From the same pier you also have an unobstructed view of the Titanic pier (which can also be seen from the park on the other side, but it was packed with people that day and one would not get to the water). After a stop on the pier, we went to the aforementioned Memorial Garden, where neither of us was before.

On the map, it looks like the gardens are a long way away, but if the weather is nice, I definitely recommend going to the gardens. Along the way there are not only beautiful views of the sea and back to the center, but you will also get from the tourist part of Cobh and see how the locals really live.

Titanic Memorial Garden is a small garden with a monument, where you will find the names of all passengers who boarded the Titanic directly from Cobh. In addition to the monument, there is a view of the bay and the sea with benches and you can sit here before heading back to the center. There is no parking, so leave your car parked in the city center. 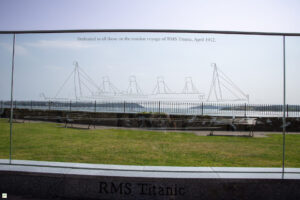 My mom and I went to the cathedral right after the gardens. It is probably the most iconic building in Cobh and certainly one of the most famous. This time I overcame myself and went inside and it’s nice. The view from the cathedral itself, of course, 11/10. At that moment, it amused us a bit, because live music came up from the park down below. After the cathedral, we stopped at the colorful houses down the street. But we didn’t go to the park opposite, because the street is dangerously steep and I somehow didn’t believe myself that day. We walked further down the street, where once a stone fence was not so high (according to Google Street view) and from where you could see both – the cathedral and the houses. Nowadays, if you don’t have at least 1,7 meters, forget it right away. On the other hand, I recommend the park in a steep street, it occurred to me that people walked the path to the top of the park just below the stone fence, so the result should be the same (of course I found out at home, so next time it is).

We continued on the way back to the sea, from where there are also nice views either of the cathedral behind us or of the train station, the sea and Spike Island in front of us. Spike Island used to be a prison (something like Alcatraz I guess) and is now open to the public. Ferry leaves the island from J. F. Kennedy Pier and tickets must be purchased in advance. We didn’t make it this time, but we immediately added it to the list of future visits, because in addition to visiting the prison, the island also offers beautiful views of Cobh and I just want that.

In the end, we hung around the square and sat in the park, where we had a snack accompanied with live music. Then we went to the pier once more, because as I indicated at the beginning of the article, I was not satisfied with my photos and in the end we still wanted to have ice cream to compare it with the previous day in Howth, but the queues were so long that there was no ice cream for us in the end.

I would also like to mention randomly that it is definitely worth looking out the train window to and from Cobh. Nothing extra happened to us on the way there, but on the way back there was a low tide and we saw seals, which was a good patch for a day without ice cream.

So, as I said, I definitely recommend Cobh. It’s probably not a day trip, but you will kill at least the afternoon here and there are definitely things to keep you entertained. 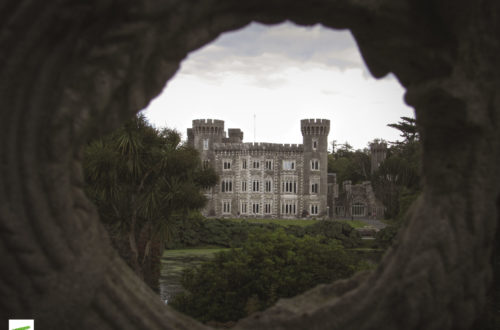