At the end of May, I returned to Portugal after three years. This time, instead of Porto, I headed south, to Lisbon and Sintra.

I was in Porto at the beginning of 2019, in winter, and still the city made an impression on me. I went to Lisbon at the end of May (I didn’t choose the date, I went to a friend’s wedding) and Lisbon had a lot to do to match Porto (I might get to that in one of the future articles). Sintra, on the other hand, was amazing at first sight. The weather for those few days was quite nice – no rain, enough sun, humidity, so you sweated a like crazy. But it was my first trip outside of Corona, so I was just happy to finally made it outside of Ireland.

Sintra is a small town not far from Lisbon, hidden between forests and hills. It is an absolute paradise for lovers of nature, beautiful views, architecture and castles. There is so much to see that one day is not enough. But we only had one day, actually an afternoon. I took the advice of my friend D., who was on a trip with me and her husband J., in Sintra. 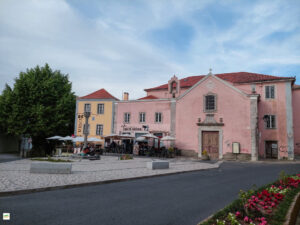 We didn’t have an exact plan for the day, but D. had been here once before, so we skipped The Palácio Nacional de Pena, which is famous for its colorful plaster – yellow and red. We only saw it from a distance, from the opposite Castelo dos Mouros. But before I get into the details of everything we did and didn’t manage to see, I just want to point out for those of you who would like to go there in the future:

Sintra can be reached in 45 minutes by train from Lisbon and the ticket can be bought at the train stations (eg Estacao do Oriente or Rossio). I think one trip cost me 3.40 euro or so. The train runs quite frequently and stops in the middle of the village in Sintra. Right at the train station, you will probably notice that there are a lot of people with cars trying to attract tourists. They will tell you that it takes an hour and a half to walk to one of those castles. What they don’t tell you is that it’s uphill. Like really uphill. We walked through the local park, where there weren’t many people and it was beautifully green, but my legs took a beating, especially in this weather. So if you can afford it and want to see as much as possible, then I recommend a local bus, car or hire one of the cars.

In the park we came across the amazing building of Villa Sassetti. As I already mentioned, there were not many people there, so we could enjoy it without a crowd of tourists. That building is closed, but at least there is no entrance fee.

From there we continued to the aforementioned Castelo dos Mouros. There is an entrance fee to this castle. There is also a booth in front of the entrance, which the locals call a cafe, but it doesn’t really look like a cafe at all. However, they do sell cold drinks/alcohol and there are a few benches to sit on (which will probably be occupied by other tourists).

Once you reach the entrance to the castle grounds and buy a ticket, you can use the local toilets or the cafe (which looks like a cafe). I also recommend being on a lookout, during our visit a cat sunned itself on one of the paths and let itself be petted! 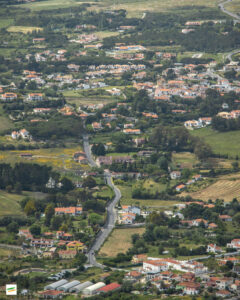 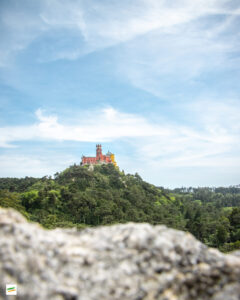 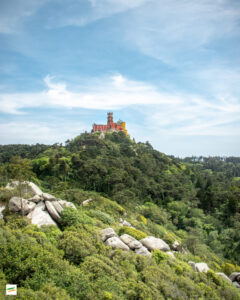 You can go to the castle itself through the forest. It is not a castle, as we know it from the Czech Republic. Castelo dos Mouros are now just walls with a few towers that are not open. However, the castle has a beautiful view of Sintra, the ocean and the aforementioned The Palácio Nacional de Pena. But the castle is built on a hill and the walls themselves also go uphill. Although there are stairs everywhere, be prepared for cardio. It was hard for me personally, but my knees are forked up haha Fortunately, there weren’t many people there and you can get proceed without getting in the way of people. 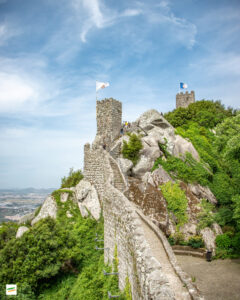 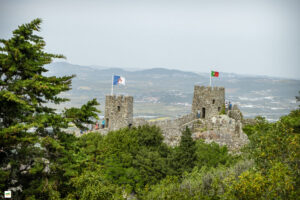 After Castelo dos Mouros, we went down on foot. The road from the hills, on which castles like Castelo dos Mouros are built are serpentines everywhere you look. We shortened our way by forest paths, but sometimes we had to jump from high stone fences. Fortunately, no one was hurt and along the way we still enjoyed the view of The Palácio Nacional de Pena and Castelo dos Mouros itself. 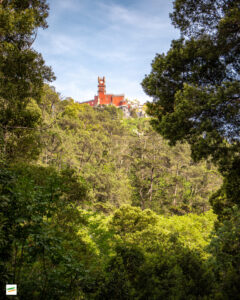 We originally wanted to visit Quinta da Regaleira, however in Sintra some places close very early (in this case at the end of May already at 5:30 in the afternoon). So at least we looked through the fence and headed into town for dinner before heading home.

Back in Sintra, a waitress caught us on a corner and we had dinner at the Portuguese restaurant Tulhas. I had a medium rare steak with mushroom sauce and portuguese potatoes and oh my god, it was something (portuguese potatoes are cut like chips – thinly sliced)! I didn’t have room for dessert after the meal, but I’m sure they have delicious ones too. It’s a small restaurant, they only had a few tables, our waiter was a middle aged man who was pacing around all the tables and chatting with all the customers. And while I may not be someone who really likes this, it was nice that he showed interest. I didn’t know it at the time, but Portuguese people aren’t always that nice, so the guy was really trying. Also, the other night we had problems in Belém with dinner and service, so Tulhas really 11/10! 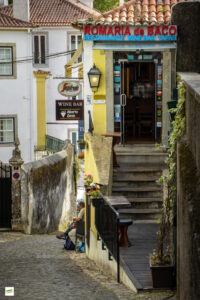 After that we just got to the train and went back to Lisbon. As you can see, we actually managed only one proper monument. I’m not sorry we didn’t get to see that much, I’ll just go back to Sintra one day. Which I would like to go back to, even if I had seen everything, because it’s a really cute village with beautiful nature. What I regret is the weather. It was hot but humid, so we were sweating like crazy all day, but at the same time we didn’t see the sunset (which must be next level in Sintra) because there were already clouds at that time.

However, I recommend that you decide in advance what you want to see and drive around Sintra. You can find more info and all the monuments in Sintra in these articles (only in ENG) – article 1 and article 2.

On my Insta @moonfell44, I added a few photos from Sintra to Highlights “wallpapers”, which you can easily use as your new mobile screen background 🙂 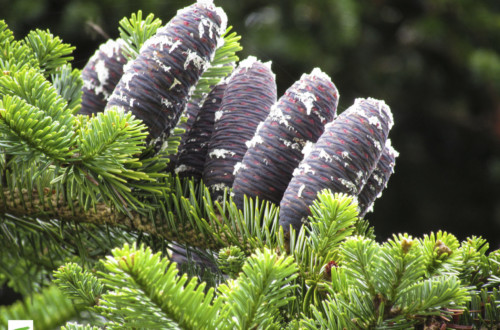 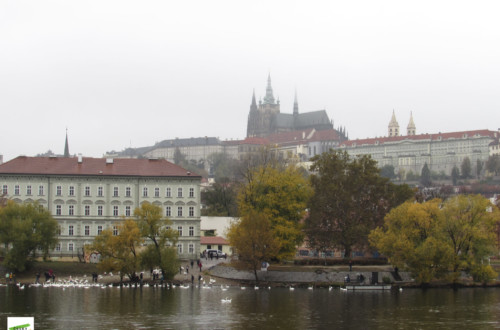