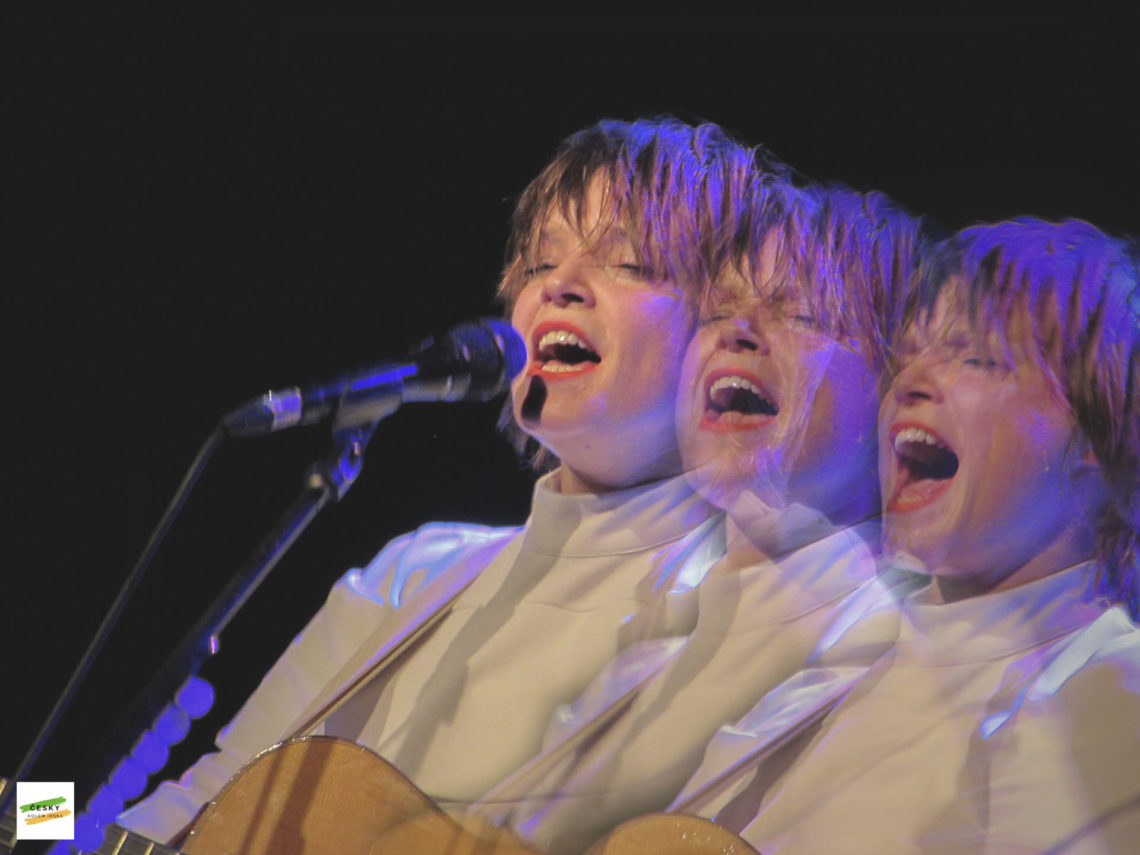 Hearing Wallis Bird name probably doesn’t ring any bells, however, that doesn’t change the fact that you should give her a chance. Wallis is an Irish singer-songwriter currently living in Berlin. She has released a new studio album Woman this year and to my delight announced an Irish leg of tour. Originally I was thinking about Dublin and Cork but then Sigrid announced a Dublin gig so I only went to Dublin.

Wallis is an extraordinary artist from a small town Enniscorthy in County Wexford (southeast of Ireland). What is interesting about Wallis apart from her pop folk style is a fact that she is a left handed but she plays guitar for right handed people – just upside down. When she was a kid, a lawnmower cut all her fingers off on her left hand and although they got sewed back in she’s been playing guitar her way.

However, I think this is just an interesting way of showing the artist’s character. I got interested in her work because of her voice – she can do unbelievable things with it. The first time I got to hear the voice live was during Culture Night in Dublin. Culture Night is one Friday in September when certain culture spots all around Ireland are for free (or a tiny fee) and there are concerts everywhere too. About two years ago we visited a theater in Waterford (which we don’t go to usually) and there were bagpipers playing in front of it as well as local orchestra right behind the corner. All thanks to Culture Night. Obviously, there are numerous events happening in Dublin and there is no way to see them all during that one night. I found interesting that this year, through a special lottery, you could’ve won a ticket to Áras an Uachtaráin, a building in Phoenix Park, where the Irish president resides. It is located just behind the Dublin Zoo. Not sure if a tea at 5 with Michael D. Higgins was included during the visit too. I had decided to go to National museum of Ireland – Decorative Arts and History because there was an open-air concert happening right at the courtyard. I was accompanied by a new Finnish colleague for whom this was also an experience. Nearly all performers (rap, pop, folk, opera and much much more) were all accompanied by RTÉ orchestra. Originally I wanted to go because of this orchestra ’cause I know them from screening of Harry Potter and Star Wars but then it was brought to my attention that Wallis will be also performing that night. And that was the first time I saw her live.

Obviously it’s impossible to compare two songs (one was a cover) and a full gig. So even after Culture Night I still didn’t know what to expect from Wallis. The gig took place in Vicar Street, my favorite club, a venue where I saw Tegan & Sara, Lindsey Stirling and Milky Chance. This time the standing place converted into seating and the balcony was closed. I sat right below balcony at the side and there was a path between my row and the tables in the middle of the venue. Wallis had also noticed that and during one song she walked all around the venue and people (Yes, she walked right passed by me and I was done ahaha).

However, I was impressed by two closely related things during the gig. Wallis made sure we all knew that she was super grateful for every single of the person in the audience and she made sure we knew that this was our gig and that she was planning to play songs as we wished (which happened in the second half of the gig – we simply shouted song names at her and she obliged). At the same time she was standing on her own at the stage the whole gig. Oh, did I mention that she played for two hours straight (120 minutes)? Because she played all those 120 minutes on her own. She has Aidan in her team who was changing the guitars’ strings. She kept tearing them apart as she was tuning guitars. He also accompanied her but only during one song. Otherwise she played the whole gig on her own. Without a band and vocalists. And I have never ever attended a gig like this, guys. A total one woman show.

It was amazing that Wallis played for two hours. However, I had to literally run afterwards to catch the last bus. And who knows me know that I don’t run. Ever. That night I had to run from Vicar Street all the way behind Trinity College – 1,5 km. Google was telling me that it takes 15 minutes, the bus was leaving in 14… In the end I made it two minutes before the bus arrived. It was a great midnight cardio.

I was laughing about it though and when Wallis announced a Waterford gig (in the theater I was talking about earlier) I bought two tickets straight away for me and my mum. Wallis doesn’t perform only in Ireland and if you ever bump into her then I do recommend to give her a listen – not only she has great songs and voice but she is more than capable of leading a gig on her own and she is funny in a nice Irish way.

30 Seconds to Mars in Dublin + night shots of Dublin

Throwback: Imagine Dragons gig and release of their new album